Arvind Kolhatkar said…
I came upon your post about Bhor when looking for a name of an officer of the 25th Native Infantry posted at Satara in the early 19th century.

A few months ago I had gone on a visit to Shivthar Ghal, the natural cave at the foot of the Varandha Ghat where Ramadas Swami wrote his Das Bodh. On my way back to Pune, I made a short detour through the town of Bhor to look at the Wada of the Pant Sachiv. Bhor is a small town and the Wada is in the heart of the old part. I only saw it from the outside. It now looks quite delapilated and hemmed in by similar old houses.

Just outside Bhor is a bridge on the river Neera, constructed around 1930. The commemmorative stone on it gives the name of the then Ruler of Bhor and his wife. It was completely plastered over by handbills announcing the program of a poitical party and I had to tear it off to read the inscription!

You would of course know the Bhatghar Dam and its predecessor Whting Dam built by the British on Neera.

With the collapse of the Maratha power,many of the old forts of the Marathas, like Rajgad and Raigad, closely bound with Shivaji's activities, went in the nominal area of the Bhor Sansthan. I have visited all of them and extensively read about them. My impression is that the Rulers of Bhor neglected the upkeep of these places as they were more interested in staying on the right side of the British than preserving the memory of those because whom they would eventually rise to the dignity of 'Raja'!

Murali RamaVarma said…
Thank you, Kolhatpur for your most informed response and for the details about your recent visit.As you have rightly observed , most of the princely states, we could observe, clinged on to the power centres according to times for obvious reasons.

Subodh said…
I just cam across this story, while I was searching for memories of Indian princely States. I am the Editor of www.dadinani.com, where we are collecting a variety of Indian memories, with a focus on at least 50 year old memories. I would very much like to record the memories of this family. If there is any way you can make the link, I would appreciate it very much. While I live in the US, we do have contacts in Pune, who could go and meet him.

Thanks for your mail. I was delighted to visit your site www.dadinani.com which I found quite interesting. I could only read excerpts and it was indeed indication of some wonderful memoirs.

I have referred your mail to my friend Dilip Gejji, who shall be in touch with you with the needed references and assistance. Do let me know of the follow-ups.

praveen bavadekar said…
I write these comments as I am grieving for my father, Sharad Vinayakrao Bavadekar, who died last night. He was nearing 80 and
Bhor held a special place in his heart.

he was born in the Bavadekar family of bhor, who were closely associated with the kings of bhor and according to my father, my grandfather vinayakrao held a position equivalent to the prime minister of the state, and was also the district and sessions judge.

My father had fond memories of his childhood and youth spent in Bhor.

Eventually, he settled in Belgaum, where I was born and brought up. Though Belgaum has also a deep significance for our family, with my fathers grandfather, Gangadharrao Deshpande being a freedom fighter of this area, I have always felt the void of not knowing my fathers family history.

This was one of the posts I turned to, in a vain attempt to replace my father's fond memories with the world wide web.
11:30 am

I am very moved by reading your comments. I convey you my deepest condolences on the sad demise of your beloved father. I realize how much he meant to you, as I think of my own father who is aged 89 and back in India at my ancestral home.

I read the details about your father, grandfather and great grandfather with great interest. All of them, I could easily understand, belonged to a world of larger value systems as compared to the present one.

Just as your father always retained fond memories of Bhor, my father Rama Varma keeps similar memories of the erstwhile princely state of Cochin and the royal family of Kodungallur, a principality in it. He had his high school days, staying at the royal household of Kodungallur staying with the senior Rajah there.

I bow in reverence to the memory of your venerable father and pray for his departed soul.

Uday Bhagwat said…
Dear Murali,
The information about Bhor Dynasty was a good reading. I write this as the Bhorapgad or sudhagad (new name in free India) where the goddess Bhoraidevi is located was once Kuldaivat of Bhor Dynasty. My Great Grand father was also related to Bhor Dynasty. I am keen to know if any references can be had from the current generation e.g. HH Padma Lokur. Is it possible for you to help me.
With regards,

Murali RamaVarma said…
Thank you, Uday Bhagwat. Glad to know the details. Let me try to contact HH Padma Lokur through her son in law to be of help.

i am naresh nigade stays in pune we belong to shirval near bhor we were given tamrapat by king of bhor but it is lost now can i please get any information now i am not interested in property but i have to search my native village becuase i am not sure about that shirval is our native village
2:50 pm

Unknown said…
Hi Murali,
Can you find out Death Date and Month of Raghunathrao Shankarrao Pant Sachiv (11th Raja Of Bhor). It would be helpful for Wikipedia article.

Popular posts from this blog 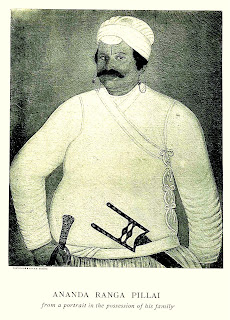 A s I walked through the Ranga Pillai Street in Pondicherry, I asked my colleague if he knew the reason why the street was so named. Thankfully, he had heard of this colourful personality Ananda Ranga Pillai of French India who lived during the tumultuous times of the mid 18 th century when both the English and the French tried hard to have its foothold over South India. 18th century engraving of French Pondicherry Ananda Ranga Pillai (1709-61) was the first secretary and adviser of the French East India Company in Pondicherry during the early decades of the 18 th century. He was the “Dubash” or the translator and commercial representative of the French Governors, notably that of Joseph Francois Dupleix with whom he had a very personal rapport throughout his life. His private diary written in Tamil and covering the period from 1736 to 1761 is an amazing record of personal, historical, political and social matters during those momentous years of South Indian history. We
Read more 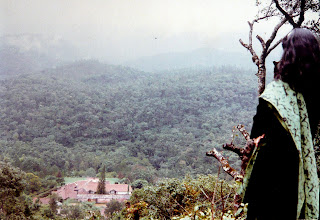 Scenic beauty of Coorg 1990 O ften I have felt that we Indians in general and Keralites in particular know little, literally and figuratively, about our own neighbours. Coorg, Kodagu (or Kodaimala nadu ) often referred to as the Scotland of India was one of our neighbouring independent princely states during the British Raj. Madikeri is the capital of the present day district of Coorg in Karnataka. The history of the Coorg Rajahs is delineated in the Rajendraname, a work compiled by order of Dodda Vira Rajendra Wodeyar, the hero of Coorg history, and the Coorg beau ideal of a warrior king. It comprises a period of 175 years, from 1633 to 1807. The life and times of Chikka Veerarajendra, the last Raja of Coorg makes very interesting reading and many of the incidences could beat the hell out of the stories of some Hollywood thrillers. I recall my visit to Madikeri twenty years back when I and my wife stayed there for a week for rest and recuperation enjoying the climate, the food a
Read more

Some Stamp Papers of the Princely States of Cochin and Travancore 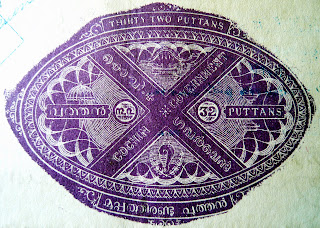 Stamp paper of value 32 puttans. T he studies on the court fee stamps, revenue stamps and other stamp papers of the pre- independent days of India can be of much interest to enthusiasts. Those pertaining to the princely states of Cochin and Travancore and done with much aesthetics and are of great historical importance. The stamp papers were designed by the British as a means to collect taxes from residents of some of the Princely States as early as 1797. The designs of these papers included the name of the state as well as the amount of tax imposed. Early examples of stamped paper from British India and the Princely States were simpler and often colorless, much like a notary's seal. Later, these were replaced by typeset or engraved stamps. Subsequently, color was added, and printings for many of the states were imported from Europe. I have gone through some of my collections and found the portrait series of Cochin much to my liking. Sir Sri Rajarshi Rama Varma I, Raja of
Read more

Murali RamaVarma
Stranger to myself. Often baffled about the myriad ways of life. How did the simple faith elude me? Has the scientific learning something to do with it?